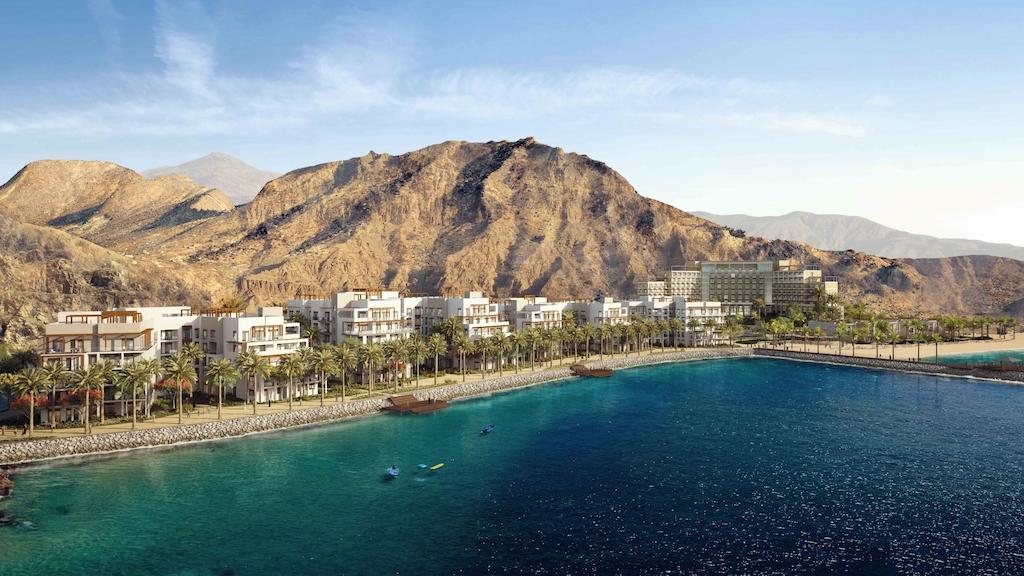 Fujairah is a unique emirate, which, unlike others, is located on the shores of the Gulf of Oman in the Indian Ocean. It is important to note that the waves here are not as strong as, for example, in Sri Lanka or Bali, which will be comfortable for adults and children. Dive into the underwater world, that’s why tourists from all over the world come here… to see the luxury and enjoy the underwater life of the Indian Ocean: coral reefs and marine life. Diving is one of the top 10 entertainments in Fujairah.

Fujairah offers excellent diving opportunities – it is no coincidence that divers from all over the world come here to international diving centers. After the opening of the International Maritime Club, Fujairah became the venue for various water sports competitions such as boat races. In addition, cruise tourism is one of the priority areas in this emirate. Al-Qaeda (Snuppy Island) and Kor Fakkan (Martini Rock and Shark Island) are considered to be the best areas for diving and snorkeling. 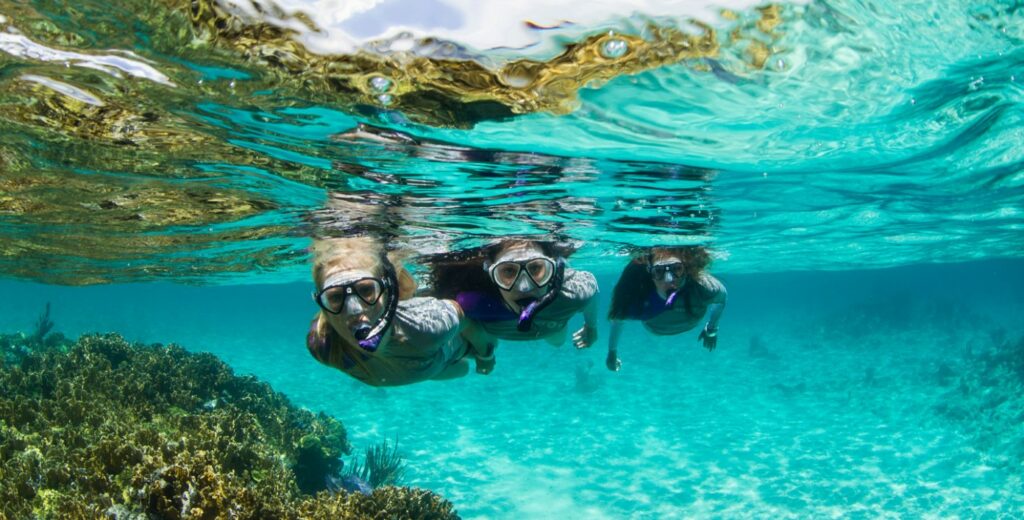 The famous Friday market is very popular with tourists, where you can buy anything – gold, souvenirs, clothes and even if you suddenly want something exotic, a donkey.

So, for fans of shopping – the largest shopping centers in the emirate: are Century Mall Fujairah, Fujairah Trade Center, Dana Plaza, and Safeer Mall Fujairah. An interesting local feature is the night market on Fujairah Cornish. Here are numerous shops and counters with souvenirs and interesting examples of traditional arts and crafts. Entertainment includes camels, horses, donkeys, and children’s rides.

No less interesting is Friday’s Masafi market, which offers a huge selection of carpets, national pottery, etc. Nearby is a miniature building of the oldest mosque in the UAE, built in the 17th century. This is the Buddhist clay mosque.

Fujairah is rich in monuments and amazing architectural examples. Including:

«El Hale Fortress.» The former palace of the Emir of Fujairah. The extraordinary fort, loopholes, watchtower, inner bedrooms, and other rooms amaze the imagination.

Al-Bidiya Mosque. Built about five centuries ago, it attracts thousands of tourists from around the world.

Museum with the archeological gallery. Here are the finds of ancient settlements that existed before our era.

Ancient Muslim cemetery. It is located in Dibby. It is here, according to legend, buried the soldiers who brought Islam to these lands.

Bullfights are held every Friday from September to May from 16:00 to 19:00 in Fujairah on the promenade near the road leading to Kalba. They occur without human intervention. During the show, about two dozen bulls push and fight for victory. 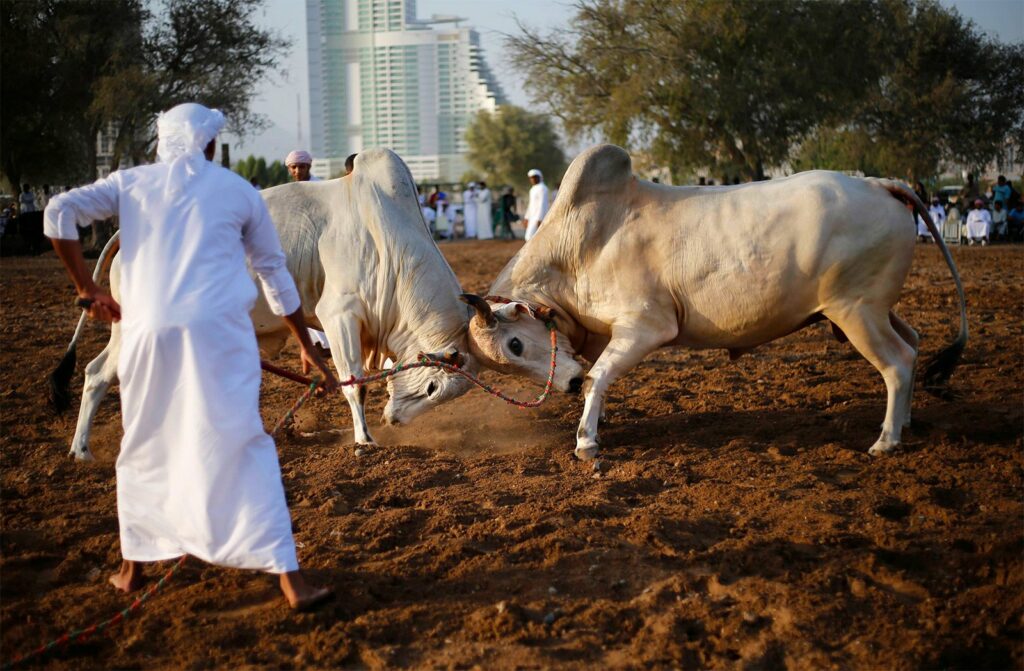 The basis of Arabic cuisine is meat dishes, vegetables, seafood, fruits, and delicious desserts. What you should try in Fujairah is «al madruba» – salted fish boiled with spices and served with flour, «Guzi» – lamb with nuts and rice, «hummus» – chickpea paste, «kibbeh» – meatballs and other options for meat dishes with vegetables. We recommend finishing the meal with a dessert made from cottage cheese «esh-asaya» with a mug of coffee brewed in a Turk.

Fujairah is a museum with an archeological gallery, which finds prehistoric settlements discovered near the nearby settlements of Kidfa and Bitna. Excavations can be viewed here. There are several of them, the most famous being the T-shaped excavation, which is an elongated burial ground divided into chambers.

In Fujairah, natural areas are equipped: Al-Wurayah waterfalls and Ain Al-Madhab gardens. Ain Al-Madhab Gardens are located in the foothills of Madhab, in a picturesque valley. There are sulfur springs, the waters of which are used for medicinal purposes in two pools (separately for men and women). On weekends, performances with elements of folklore are arranged in the gardens. Not far from Ain Al-Madhab there is a rural settlement where you can get acquainted with the culture and way of life of the local population. This place is open to the public daily.

In Fujairah, in November they are not knocked out of the rhythm of resort life, but they are significant for the inhabitants of the country. In November tourists may see how the Muslim world celebrates important religious dates. The lunar Islamic calendar for the current year will tell you exactly what will happen. At the beginning of the month, exercises of the UAE Armed Forces Union Fortress are unfolding on the roads of Fujairah or nearby emirates. Spectators are brought to the place of the military show by special buses. The event is designed to highlight the role of highly qualified armed forces in protecting the nation and people. Pilots perform tricks in the air, effectively leaving behind the aircraft trails of smoke in the black, green, and red colors of the UAE national flag. On water and land, the military demonstrates the power of the army no less spectacularly. 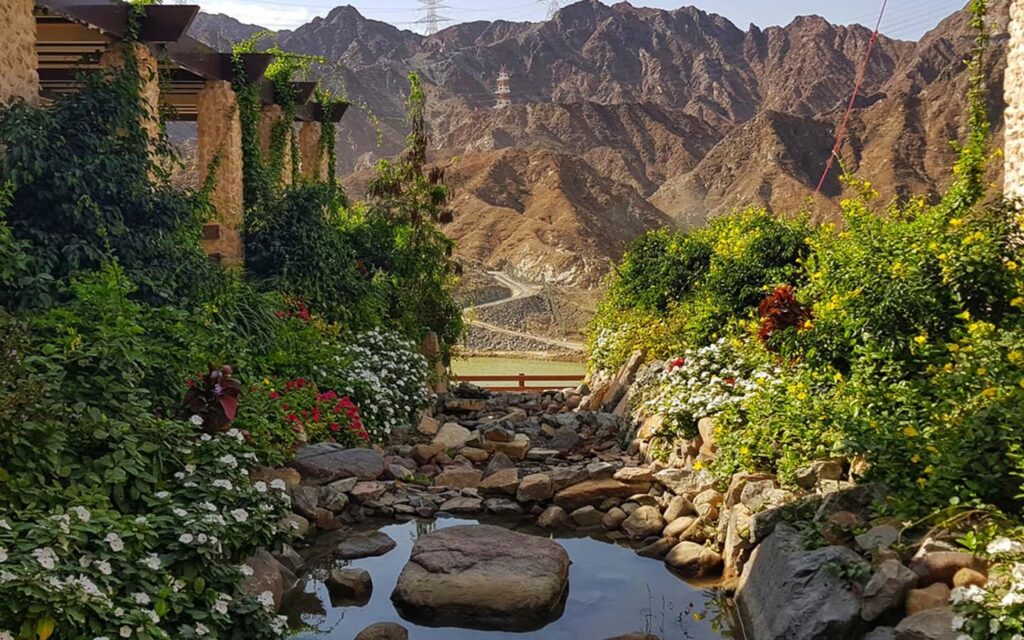 This is a mountain safari in jeeps or hiking or picnic excursions. On the coast, such excursions are offered by both tourist centers and the hotels themselves. Local guides include a stop at a camel farm along the route, where you can taste chocolate made from camel milk. Or you can try to rent a car and go on an exciting adventure on your own, leaving the walls of your cozy Radisson Blu Resort, Fujairah with soft pillows and a comfortable duvet.

The Al-Hajar mountain range stretches across the entire territory of Fujairah and Oman. In the last state, the height of the mountains reaches 3020 meters! In Fujairah, these mountains are the smallest and look more like dunes, smoothly turning into rocky ledges. However, this does not detract from their beauty. There is a ring track around the Fujairah mountain range so that the mountains can be circled, then returned to the starting point of the route.

Well, and completes the number of top entertainment – Nightlife in Fujairah. At night, Fujairah takes on a new look. Loud music, delicious drinks — this is what lures a bunch of tourists to clubs. The most recommended are Ratsky, Bliss, and ROYAL BEACH HOTEL AND RESORT. 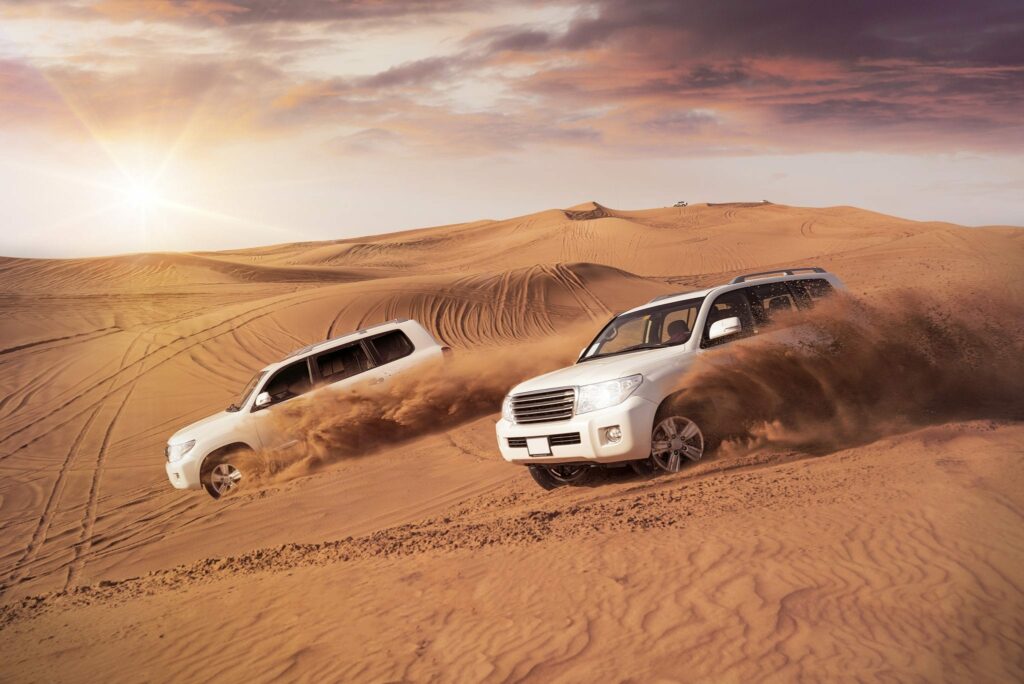